During Akbar’s time, Rajputs did not consider Mughals as equal to them. Raja Bharamal whose kingdom was being threatened to be annexed by Adham Khan, the general of Akbar and his foster brother thought of a last ditch effort to save his kingdom and family. He decided to offer his daughter Hira Knwari’s hand in marriage to emperor Akbar. Some say that Akbar asked her hand in marriage but not for this alliance. This was his first marriage to a hindu princess and he never asked her hand in marraige as he had only married muslim royalty till then. He took time to give his reply as he was not sure of the implication of marrying in inter religion and consulted his close associates(foster fathers) before saying Yes to this wedding. Its only in later hindu princess marriage he asked the daughter-sisters hand as a surety of loyalty from rajputs. 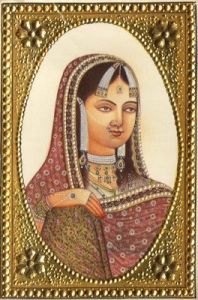 Hira Kunwari and her mother was dead against this wedding as they knew that she will become an outcast among Rajputs and her own family after marriage. Hira Kunwari very well knew the implications of being forced to marry an muslim ruler. Hence although she converted to Islam after marriage to Akbar still she retained her hindu rajput customs of worshipping and customs.

The rajput princess who married muslim ruler were treated their daughters as an outcast. The rajputs would not dine with their daughters who had converted. Hira Bai who married Akbar was treated as an outcast in Rajputhana and she never visited her family home Amer in 61 years after her marriage except 2-3 times. She had visited Amer once with Salim and there was an uproar both in Amer and Agra fort. The mughal court ulema opposed her visiting Amer with Prince Salim and in Amer they shunned her and treated her with contempt as she was a muslim now not allowing her to dine with her family. Akbar after knowing this decided never to send Hira Kunwari and Salim to Amer again. This was common in inter religion marriages of those times the woman would lose touch with her maayka. Even in 21st century if a woman has inter religious wedding she loses her religion and is shunned by her family in asian countries especially.

At Agra, Hamida Banu and aunt Gulbadan opposed Akbar’s marriage to a hindu princess as they were close to Ruqaiah and Salima. Hence although Akbar sent messengers to get them to attend his wedding none of his family mother, aunt, sister and wives attended the wedding. Akbar went ahead with marriage for political reason but had to face opposition within his family. Its only much later that his family was reconciled to the fact and tolerated Hira  Kunwari(once she gave birth to an heir).

Because she was an Hindu she had no significant role in Agra court or Delhi although she would handle the ship trades that took pilgrims to holy land and sold spieces to other countries. But otherwise Hira Kunwari had no great standing in Mughal court. The fact that Akbar built so many palaces for Mariam-uz-zamani in agra, allahabad, ajmer does not indicate any great standing for her in mughal court and royalty. Akbar built those palaces as he did not have a son till 29 years and so many wives and salim was got after many manaat so he built them for not only mariam-uz-zamani but salim too. If some other wife would have had his first child he would have done the same for that wife instead of for hira kunwari.

Her only supporter was her husband Akbar and her son Jehangir. Jehangir who had seen his mother being treated like outcast in Rajputs and also not given importance at Mughal court was very upset but could not do much given the circumstances. Akbar also tried to pacify the Rajputs by giving them key posts like for Man Singh and Bhagwan Das but still Hira Kunwari was treated indifferently by her Rajput family members. Man Singh was the adopted son of Bhagwan Das.

Hira tried to placate her family by marrying her neice’s to her son Salim but this outcast treatment lasted for a few more generations by Rajput families of their daughters who married muslim rulers. In order to placate them both Akbar and Jehangir allowed their wives and mothers to worship hindu Gods inside agra fort and also allowed diwali, holi and rakhi to be celebrated in the fort. There are also instances of both Akbar and Jehangir visiting temples. But none of this made the Mughals more acceptable to their rajput relatives except some exceptions for many generations.

The law of succession in Rajputs was patramonial hence they readily agreed to give away their daughters Rajput princess in marriage to Mughals for political survival and monetary benefits. But the mughal relatives were never invited for any special ocassions of their rajput relatives. Also they refused to take muslim wives as they wanted their family line to be Rajputs only. When mota Raja udai singh of Jodhpur decided to marry Jagat Gosain aka Jodha Bai to Jehangir the Rajput Rathore Kalyan Das threatened to kill both of them and Akbar had to send imperial foces to attack siwana to save them.

Rajput ladies who married Mughals became muslims and were buried in muslim cemeteries  and they could no longer visit their families and even dine with them. It is confirmed that if/when Hira’s family visited Agar fort(rarely) they would not dine with Akbar and his family or ministers. This is menmtioned in akbarnama saying rajputs were given great positions except not dine with akbar. Only his foster father, brothers, mothers, sisters and few ministers(birbal, abul fazl, faizi, man singh) were allowed to dine with him. But the truth was reverse the rajput relatives of mughals were not fine with dining with them as they considered them inferior not equal.

Another fact in those days muslim rulers were considered as barbarians and the relations were purely for trade etc family relations rarely existed between family. Also the kings were scared of boycott by the religious authority in those times. And majority citizens were hindus so raja’s could not displease them and rule. So although they married their rajput daughters to mughals once converted they did not treat their daughters or their children, husband fairly. There is rarely any instant of hindu kings giving a high post to an non-hindu in his court in those times.

That is why Akbar is called the great because he inter mixed with other religions and gave high post to hindu in his court. He also gave his wives freedom to practice their religion within confines of his fort. But for all official purpose his wives were muslims for outside world and mughal court. Since he allowed his wives religion and custom freedom and also discussed about other religions and visited other religious places the ulema had issued a fatwa against him.

They even issued fatwa against jehangir who was considered conservative but in reality was more liberal than his father akbar. Jehangir had ordered imprisonment of some religious ulema for defying his orders and trying to control him by telling him what to do and what not to do on certain religious matters.  Khurram-shah jahan used this against jehangir later on to show he was more of a muslim ruler than his father during fight with nur jahan.

Hiira wanted to be buried with Akbar but again there was oppositions. So she decided her resting place and Jehangir built her tomb very near to his father Akbar. Jehangir who wanted her memory to remain forever and give her a tribute built the Mariam-uz-zamani mosque so that his mother is remember long enough.

Although Hira Kunwari got Akbar’s support(after salim was born before she stayed in harem with other women, only ruqaiah and salima stayed with hamida and family in seperate palace for akbar’s close family) and jehangir’s support (though jehangir had close relation with ruqaiah and salima his other two step mothers too) but otherwise all this hype about hira being the love of akbar’s life is not really true. Akbar married even in his 40s and 50s to other princess for political reason(as far as 1596) and he had 6 children from 5 wives/cocubbines (who survived to adulthood). Daniyal and Aram were his favourite children apart from Salim being first born.