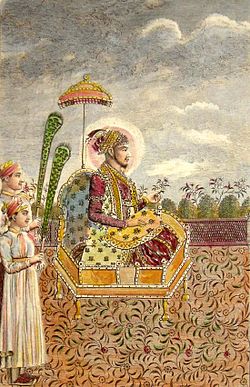 Shah Alam II was the Mughal emperor till 1806. When Shah Jahan built Red Fort in Delhi he permited celebration of Holi, Diwali and Dusserha inside Red Fort. But Aurangzeb, when he became emperor abolished all celebration of Hindu festivals in the Red Fort. But Emperor Shah Alam revived celebrations of these Hindu festivals in the Red fort in his reign and added one more Raksha Bandhan festival to the list.

” Sawan is the month loved best by everyone in Delhi.  All the people come out in the open and enjoy themselves. There are jhoolas swinging from every tree and the sound of laughter and singing everywhere. The festival of Raksha Bandhan is the most important and popular. In the Red Fort particularly special preparations are made weeks in advance.Jhoolas are set up with silver supports and ropes of silk with seats of gold and silver. Amidst all this gaiety the Emperor emerges from the Moti Masjid  and occupies a small throne while the shehnai plays. Ramjani takes a seat near the Emperor and ties around his wrist a rakhi of gold and silken thread with pearls strung round it. Then she takes a sweet from a silver plate and gives it to the Emperor while everyone chants  Mahabali Badshah Salaamat (Long live the king).”

Now lets hear the story of how a Hindu Brahmin girl became Emperor Shah Alam IIs Rakhi sister. Alamgir II was the emperor of Mughal empire before Shah Alam II but he was actually a puppet in hands of his Prime Minister Imad-Ul-Mulk. The emperor had great faith in mystics, priests and holy man. Imad-Ul-Mulk wanted to get rid of emperor and become an emperor himself, hence he hatched a plot to kill emperor Alamgir II.

He went to the emperor and told him: Emperor Sir, I was just passing by from Feroz Shah Kotla. A great mystic is residing there and many people are flocking to see him. He is a great fakir with magical powers”

Alamgir II got excited “Really, i would love to meet him. Why do you not get him along to palace?

Imad-Ul-Mulk replied “I would my lord, but the great fakir does not go to anyone, rich, poor, big, small. Anyone who wants to meet him has to go in self”.

Alamgir II said “OK, then i shall go to him right away”

Imad-UL-Mulk said “Your highness, you have to go alone to him and not take anyone with you. That holy man does not wish people going to him in pomp etc so its best you go alone. I know as emperor you go with body guards but we cannot ignore the mystics wishes”

Alamgir II thought and relpied “OK as he wishes, i shall go alone and meet him”

Alamgir II reached Firoz Shah Kotla in evening and the hired assasins of Imad-Ul-Mulk attacked and killed him and threw his body near river Yamuna.

It was early morning and a young Brahmin girl Rajamani was going to the river Yamuna to fetch water. She discovered the body of emperor Alamgir II but did not have any idea who he was. It was still dark and so she decided to wait near the body till the mans family does not reach there.

By this time the palace discovered the emperor was missing and search parties were sent in all directions. One such party reached the river bank and discovered the body of the missing emperor. They asked Rajamani who she was and she told them the details and then left. The emperor was buried with all honours and his son Shah Alam II became the next emperor.

When Shah Alam II heard of his fathers death story he wanted to meet the brave girl who had sat by his fathers body till search party had reached him.  The gaurds went and called Rajamani to Red Fort and she came scared on why the emperor summoned her. But Shah Alam II got down from his throne and went to her and told her “ I want to thank you for what you have done, hence forth you are my sister”. From that year on Raksha Bandhan every year Rajamani came to Red Fort and tied Rakhi to the emperor Shah Alam II.